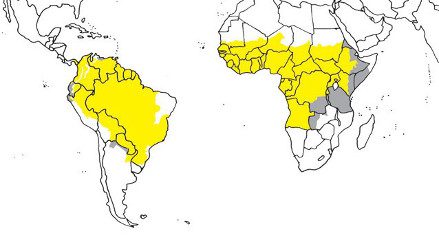 In celebration of World Immunization Week, we highlight the essential nature of vaccines by exploring some recent news and updates for the Yellow Fever vaccine. A combination of climate change, urbanization, and increases in international air travel have accelerated the global spread of many mosquito-borne viruses including Yellow Fever, Zika, Dengue, and Chikungunya.

No antiviral therapy exists for Yellow Fever, but the infection can be prevented with a vaccine. Despite this, a global vaccine shortage has made managing the disease a challenge. As responsible travellers, we have an important role to play in preventing the spread of Yellow Fever and many other vaccine-preventable diseases.

Yellow Fever is a viral infection transmitted to humans by daytime biting Aedes aegypti and Haemagogus mosquitoes. The disease causes flu-like symptoms of fever, headache, muscle pain, nausea, and vomiting. Approximately 15% of patients experience severe symptoms within 48 hours that include vomiting, jaundice, bleeding, shock, and multiple organ failure. About half of severe cases can be fatal.

Yellow Fever is endemic (meaning it is regularly found) in areas of sub-Saharan Africa and South America, but mosquitos that can carry the virus are found on all continents, including in southern Europe and in the southern United States. To prevent the international spread of Yellow Fever, some countries require travellers to provide proof of Yellow Fever vaccination prior to entering or leaving. Countries can impose vaccination requirements for all travellers or only those coming from countries with risk of Yellow Fever transmission or active outbreaks.

Do you know if your destination requires Yellow Fever vaccination?

To find out which countries require or recommend Yellow Fever vaccination, check out the following resources:

Unvaccinated travellers and the spread of Yellow Fever

Unvaccinated travellers who become infected with Yellow Fever can spread the disease as they travel from a Yellow Fever risk area to a region that is not infected, but has the carrier mosquito present. Mosquitoes can acquire the virus after feeding on infected humans or monkeys and can then spread the virus to others they feed on, leading to an outbreak. In endemic regions, the virus is typically contained in forested and rural areas, where mosquitoes transmit the virus to monkeys and occasionally humans. When infected humans travel from remote areas to more densely populated areas, large epidemics can occur.

For the past 50 years, Yellow Fever has largely been controlled in endemic areas of South America and Africa due to childhood vaccination campaigns, but the virus has recently caused outbreaks and spread to areas previously considered not at risk.

In late 2015, a single case of Yellow Fever was reported in Angola. Within months, the virus spread into 18 provinces across the country and resulted in 377 deaths. Unvaccinated travellers leaving Angola then brought the virus into Kenya and the Democratic Republic of the Congo, resulting in a further 121 deaths. Unvaccinated Chinese migrant workers also acquired Yellow Fever in Angola, but they did not spread the illness upon their return in China.

The most recent outbreak in Brazil has been ongoing since early 2017 and has resulted in the deaths of 331 people, including tourists from Switzerland and Chile. Since January 2018, at least 17 unvaccinated travellers from countries such as France, Germany, the Netherlands, and Romania also became infected while travelling in Brazil.

Brazil’s outbreak has resulted in a public health emergency and the country is now implementing a mass-vaccination initiative to prevent further spread of the virus, particularly among urban centres. Vaccine recommendations for travellers to Brazil have also been updated as the virus spreads to new areas and cases continue to be reported.

No cases, no risk? Think again.

The risk of Yellow Fever at your destination may not be easy to see. Human cases are typically used to indicate that the disease is active in an area, but undiagnosed cases, unreported cases, and a high vaccination rate among the local population can all lead to low reports of human cases.

Travellers going to areas at risk of Yellow Fever transmission, regardless of whether the area is reporting cases or not, are still at risk of becoming infected if they are unvaccinated. There are currently 42 countries across South America and Africa with risk of Yellow Fever. Vaccination is an essential tool for protection and stopping transmission of this preventable illness.

In the United States, YF-Vax is the only Yellow Fever vaccine that’s approved for use. The vaccine’s manufacturer, Sanofi Pasteur, announced that supplies are completely depleted and the vaccine will be unavailable until late 2018. Until the vaccine is back in stock, travellers departing from the United States can receive Stamaril, an alternative Yellow Fever vaccine. Stamaril is also manufactured by Sanofi Pasteur and is available at select travel health clinics around the country.

Changes to the International Certificate of Vaccination

As of 2016, the WHO amended their guidelines to state that one dose of Yellow Fever vaccine provides appropriate protective immunity for life. As such, all pre-existing and new Yellow Fever Vaccine Certificates are now valid for life and countries can no longer require travellers to be re-vaccinated or receive a booster dose in order to qualify for entry.

For more information on vaccine certificates and waivers for those with contraindications, see: Yellow Fever.

Vaccinations are a safe and effective way to prevent many life-threatening diseases. As travellers, it’s our responsibility to ensure that we are up to date with our routine vaccinations and receive any relevant travel vaccinations before we depart. Getting vaccinated can help protect your own health as well as the health of others.

For more information on travel-related vaccines, see the following resources: