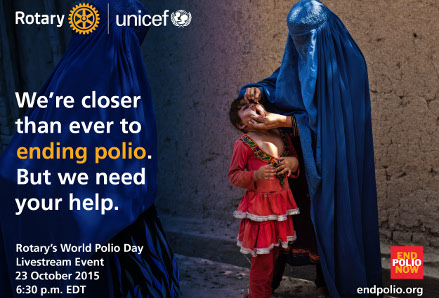 Global polio eradication programs have been part of international public health efforts since the 1980s. Now, only two countries (Pakistan and Afghanistan) are polio-endemic, meaning that the disease regularly circulates in those areas. In 1988, polio was endemic in over 125 countries.

This past August, Africa achieved a major milestone – no polio cases in a year. The last polio case on the continent was reported in Somalia in August 2014. Nigeria has also played a big role in combatting polio. Thanks to aggressive vaccination campaigns, Nigeria celebrated one year without a case of polio in July 2015 and was removed from the list of polio-endemic countries. Countries can be declared polio-free three years after the last reported case.

How the virus is transmitted

Polio is a highly contagious illness transmitted by close person-to-person contact, mainly through the oral-fecal route. It is found in the environment, grows in the intestinal system and is shed through feces. The virus typically spreads in areas with poor water and sewage sanitation.

Recently, there have been several outbreaks of vaccine-derived polio in the Ukraine, Mali, and Laos. These outbreaks are not caused by the vaccine but rather by low vaccination rates. This happens when a person vaccinated with the oral polio vaccine (OPV), which contains the weakened form of the virus to stimulate antibodies, sheds the virus in a facility with poor hygienic conditions or in the open. The virus ends up circulating in the environment for a long time and a person who is unvaccinated or under-vaccinated can get it, continuing the cycle of transmission in their community.

Travel is one of the main risks to polio eradication programs. As long as polio still exists there is the danger that it can be reimported in countries that have low vaccination rates and poor sanitation. In these areas, imported cases of polio can circulate unnoticed as the virus only causes paralysis in 1 in 200 cases.

Travellers of all ages should ensure that they are up-to-date with their polio vaccination. Polio immunization is a routine immunization, so all travellers should have received the vaccine as children plus one booster dose as an adult. If you are visiting a polio-endemic area and you haven’t been immunized or have not completed the vaccine series, you should get vaccinated. Note that India, Saudi Arabia, Pakistan, and Afghanistan legally require proof of vaccination from certain travellers. The polio vaccine provides lifetime protection.

As travellers, we have a responsibility to be vigilant against this disease, which is entirely preventable through vaccination. Global polio eradication is within our reach.

By Tullia Marcolongo and Daphne Hendsbee.