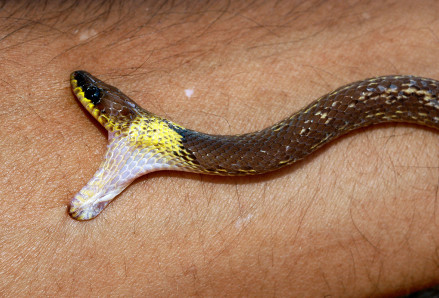 This guest post was written by Professor David A. Warrell, who is currently International Director (Hans Sloane Fellow), Royal College of Physicians, London and Emeritus Professor of Tropical Medicine, University of Oxford, UK. Professor Warrell was the 2015 ASTMH Marcolongo Lecturer.

Threat of snake-bite to indigenous populations

Most parts of the world are inhabited by venomous snakes. Snake-bites are a risk to rural inhabitants whose agricultural and hunting activities expose them and their children to this primeval environmental and occupational disease. Snake-bite is an important cause of death and disability in West Africa, Southeast Asia, the Indian sub-continent, Papua New Guinea, and the Amazonian region. There is good evidence that in India there are 46,000 and in Bangladesh 6,000 snake-bite deaths each year. Survivors often suffer persistent physical and mental morbidity. Meteorological factors affect the incidence of snake-bite. Annual peaks are during the rains (monsoons) and resulting flooding, associated with cycles of snake (reproductive) and human (agricultural) activity. Many bites occur at night and may be inflicted on people sleeping on the floor of their home.

Compared to indigenous populations, travellers are exposed to a tiny-but-finite risk of snake-bite. Biologists collecting specimens in rain forests and other habitats richly populated with venomous snakes are at the highest risk but they are likely to be the best prepared (although even expert herpetologists have been bitten in the field). Ordinary tourists have been envenomed in urban surroundings (e.g. a German tourist bitten by a cobra in the garden of a hotel in central Bangkok and a Dutch man spat at by a spitting cobra that was in his bed in Malacca, Malaysia) and in the wilderness (e.g. a British woman bitten by a rattlesnake while walking on the main trail down the Grand Canyon and a schoolboy bitten by a fer-de-lance in a jungle camp in Costa Rica).

Prevention of snake-bites in travellers

Awareness of risk is important. Find out in advance about the venomous snake fauna of the areas to be visited. There are many sources of information on the web, such as the WHO Venomous snakes and antivenoms search interface and other sites listed below. Be prepared to react appropriately if someone in the group is bitten (see below). Although snake-bite is such a small risk to most travellers, it is a common cause of anxiety and misunderstanding. Appropriate, well-informed reassurance can improve your enjoyment of travel and banish nightmares. If you’re travelling in a group that includes a designated medical officer, he/she should acquire basic knowledge about prevention and treatment.

Do’s and Don’ts of snake-bite prevention

Do not do the following:

Do’s and Don’ts of snake-bite first-aid

Do not do the following:

If, when the snake-bite victim reaches the hospital, doctors find evidence of envenoming (‘envenomation’), a specific antidote called antivenom may be needed. Antivenoms are expensive and often in short supply, especially in tropical developing countries. When planning travel to snake-infested regions to undertake high risk activities (such as orchid collecting in remote areas of tropical rain forest), it would be worth visiting the local medical facilities in advance, to see if they have antivenom in stock, or, if not, taking your own supply, to be given, if the need arises, at the local hospital (see antivenom websites below). Refrigeration of liquid or freeze-dried (lyophilised) antivenom is not essential for periods of up to one month.

About Professor David A. Warrell

Professor Warrell is actively involved in Australian-funded research on snake-bite in Papua New Guinea and Myanmar. He was formerly Head of the Nuffield Department of Clinical Medicine, University of Oxford and senior editor of the Oxford Textbook of Medicine, OTM-Infection, Essential Malariology and the Oxford Handbook of Expedition and Wilderness Medicine. His career has been as a physician, teacher, researcher, resident and traveller in Africa, Asia, Latin America and Papua New Guinea. He was originally based at the Hammersmith Hospital and, since 1975, in Oxford. He founded the Oxford Tropical Medicine Research Network in 1979. His research publications cover infectious, tropical and respiratory diseases; venomous animals; envenoming; plant and chemical poisoning; and expedition medicine.