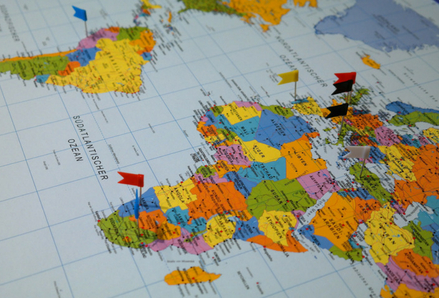 Here at IAMAT, we update our country health advice every day to provide you with accurate and up-to-date information on health risks around the world. To help you travel better, here’s what you need to know about ongoing outbreaks:

The Measles outbreak in Europe is cause for concern. Since early 2017, there has been an increase in Measles cases which has affected 1 in 4 European countries and caused over 20,000 infections, including 35 deaths. Countries with the largest outbreaks in 2018 include Romania, France, Italy, and Greece.

Measles is a highly contagious virus that can be spread easily through coughing and sneezing, as well as direct contact with an infected person’s saliva or nasal secretions. Despite the fact that a highly effective and safe vaccine exists, Measles continues to be one of the leading causes of death among children, particularly in countries where vaccination rates are low.

The current outbreak in Europe is a result of consistently low vaccine coverage in marginalized populations (such as the Roma) and a decline in overall childhood vaccination coverage. Routine vaccination coverage has been steadily declining in Europe for the past 5 years and is believed to be associated with underfunded healthcare systems in some regions and increasing skepticism towards the safety of vaccines.

Approximately 45% of cases in the current outbreak involve individuals 15 years of age and older who missed out on their childhood immunizations. Among the other 55% of cases, most involve infants under the age of one, who are too young to receive the vaccine and most vulnerable to Measles-related complications. Herd immunity – when at least 95% of the population is fully vaccinated against Measles – is the best way to protect children under one year of age. It also protects individuals who cannot get the Measles vaccine for medical reasons, such as a compromised immune system or an allergy to the vaccine or a vaccine component.

To help prevent the spread of Measles – whether you are travelling or not – ensure you have been fully vaccinated against Measles. Teens and adults without proof of immunity should receive at least two doses of Measles-containing vaccine given 28 days apart. Vaccination protects you but it also protects those who cannot be vaccinated. If you are unsure of your vaccination status, contact your healthcare provider – it’s never too late to get vaccinated.

Hepatitis A in the United States

Closer to home, Hepatitis A outbreaks continue to be reported in the United States. Since August 2016, Hepatitis A has been reported in multiple states, including Michigan, California, Kentucky, Indiana, Utah, West Virginia, Tennessee, Missouri, Arkansas and Ohio. There have been over 2,500 cases so far, with the country’s largest outbreaks in Michigan and Kentucky.

Hepatitis A is a highly contagious illness that affects the liver. It is primarily spread when a person unknowingly ingests the virus by consuming food or water that was handled by an infected person. The virus can also be transmitted through direct contact with an infected person, illicit drug use, and through sex.

Hepatitis A can be found around the world but it is more common in certain regions such as Eastern Europe, Africa, and Asia, where sanitary conditions can be poor. In these areas, large outbreaks do not occur often because the virus circulates widely, allowing the population to develop immunity. In regions with good sanitary conditions, such as the United States, most of the population is not immune because they have never been exposed to the virus. As a result, the infection can spread easily.

People who are at high risk of Hepatitis A infection are unvaccinated travellers going to countries with risk of infection, healthcare workers, people who use drugs, and men who have sex with men. In the current United States outbreak, most cases (67%) reported recreational drug use (injection and non-injection drugs) and/or homelessness. Cases have also included food service workers who can transmit the virus through food handling.

If you are at high risk of Hepatitis A or are travelling to an area where Hepatitis A is endemic (meaning it is regularly found in the area), contact your healthcare practitioner to determine if vaccination is right for you. Wherever you travel, you should always follow food and water safety precautions and good hygiene practices to reduce the risk of illness.

We have also been monitoring the Ebola outbreak in the Democratic Republic of the Congo (DRC) and the outbreak of an emerging disease, Nipah virus, in India. Ebola and Nipah are both highly infectious diseases that are believed to be transmitted by infected fruit bats. These outbreaks can have a devastating effect on local communities, particularly those with overburdened health systems.

The Ebola outbreak began on May 8, 2018, in Equateur Province. This is the 9th Ebola outbreak to occur in the DRC, but the first time that cases were reported in a major city. As of July 20, 2018, there have been 38 confirmed cases of which 29 have died.

(Update as of August 13, 2018: The Ebola outbreak in Equateur Province has ended but on August 1, 2018 a new and unrelated outbreak was declared in North Kivu Province. See here for more details).

To promptly control the spread of this highly infectious disease, an experimental vaccine, called rVSV-ZEBOV, has been distributed to high risk individuals in affected areas. The vaccine was created by the Public Health Agency of Canada (PHAC) and has been shown to be protective against Ebola in several trials. The DRC Ministry of Health – in conjunction with the World Health Organization, Médecins Sans Frontières (MSF), UNICEF and others – have been administering the vaccine and have so far vaccinated over 3,000 people. In affected areas, mobile laboratories and treatment facilities are also operating and community awareness and education initiatives have been underway.

In Kerala, India, a mysterious and highly contagious illness sparked panic among locals in the region. The infection was quickly identified as Nipah virus, a newly emerging zoonosis – an animal disease that spreads to humans. The fruit bats that carry Nipah can be found in Madagascar and across South East Asia where outbreaks occur regularly in Bangladesh and India. However, the virus has the potential to spread further, as the fruit bats that carry Nipah can migrate as far as Australia and Africa (see WHO map). In addition to Ebola, Nipah is on the World Health Organization’s priority list of emerging diseases that could cause a global pandemic.

Health authorities managed to control the outbreak in Kerala by rapidly tracing and quarantining approximately 2,000 people who were potentially exposed to the virus: 18 cases of the disease were confirmed, including 16 deaths.

The death rate for Nipah virus is high and varies depending on the capacity of the local healthcare system to identify and treat patients. At present, there is no known cure for either Nipah virus or Ebola – patients can only be treated through the supportive care of symptoms. Due to rapid responses from health authorities, these outbreaks were effectively contained, but learning more about these highly infectious viruses is a priority for preventing future outbreaks.