We’re thrilled to announce that as of May 21st, 2015, IAMAT is an official partner of Fight the Fakes, a campaign that aims to raise awareness about the dangers of fake medicines.

Fake medicines put travellers and the public at risk. Patients believe they are receiving genuine treatment, but instead they are getting potentially dangerous products that could increase resistance to real treatments, and cause further illness, disability or even death.

The Fight the Fakes campaign gives a voice to those who have been personally impacted and shares the stories of those working to put a stop to this threat to public health. It seeks to build a global movement of organizations and individuals who will shine light on the negative impact that fake medicines have on people around the globe and to reduce the negative consequences on individuals worldwide.

IAMAT president M. Assunta Uffer-Marcolongo explains how the partnership will benefit travellers and the communities they visit:

Joining the fight against fake medicines is important to us as advocates for travellers’ health. Travellers are increasingly opting to buy vaccines, malaria pills, and prescription medications online and abroad to minimize costs while travelling. Travellers need access to reputable doctors and pharmacists as well as information on the risks of counterfeit medicines. As a Fight the Fakes partner, we want to bring attention to this pressing issue in order to prevent further drug resistance, medical complications and deaths arising from the sale of counterfeit drugs.

To learn more about the campaign and what you can do to fight counterfeit medicines, visit fightthefakes.org. 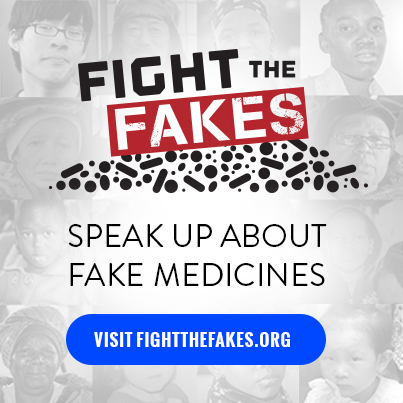