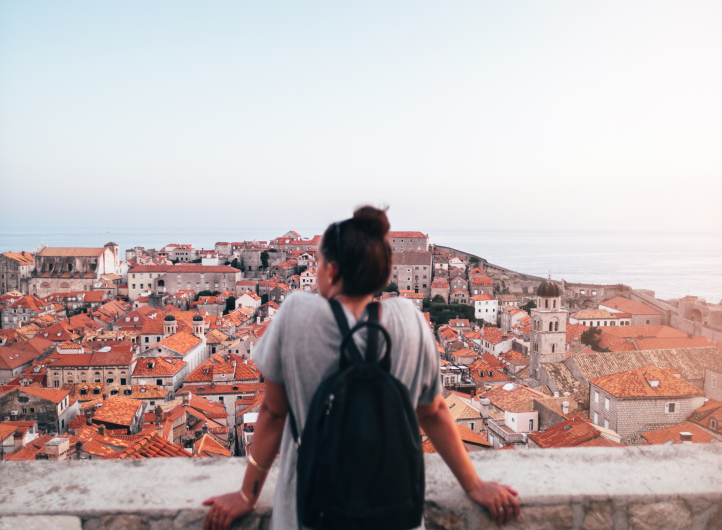 This article is part of our regular travel and global health news round-up.

Let’s face it: With all the excitement that goes into planning a trip, we sometimes neglect our mental health. And when we’re away from home, jetlagged, and sleep deprived – small obstacles can suddenly feel overwhelming.

In honour of Mental Health Awareness month, this news round-up explores various topics related to mental health and travel, including the global inequity of accessible mental health care and the legality of travelling with CBD oil.

In the news this month

1. The cities that need a warning label?

Psychosis occurs when a person cannot distinguish between what is and what is not real. It’s a serious mental health condition that, in some instances, can be triggered during travel. This article from the BBC explores why certain destinations appear to prompt strong psychological responses among tourists.

Travellers with a pre-existing mental health condition like schizophrenia, bipolar disorder, major depressive disorder, or those taking psychoactive drugs can be more likely to experience psychosis during a trip. In some instances, a person may seek out a specific destination or experience in response to delusions or hallucinations associated with their condition.

However, psychosis can also occur in individuals with no prior history of mental illness. For some, experiencing a historic or religious site can be highly emotional and triggering. In other cases, such as the phenomenon called Paris Syndrome, travellers can develop psychosis when their experience of a destination falls short of their expectations.  As Montague details:

Florentine psychiatrist Graziella Magherini described more than 100 tourists who had attended the Santa Maria Nuova hospital between 1977 and 1986 who had experienced palpitations, sweating, chest pain, dizzy spells and even hallucinations, disorientation, a feeling of alienation and loss of identity. Some had tried to destroy works of art. This was all brought on, Magherini said, by “an impressionable personality, the stress of travel and the encounter with a city like Florence haunted by ghosts of the great, death and the perspective of history”. It was just all too much, she suspected, for the sensitive tourist.

Interested in reading more about psychosis and travel? Check out our tipsheet: Travel and psychosis.

2. Why you’re more likely to cry on an airplane

Ever found yourself in tears during a flight? You’re not alone. Dubbed the “Mile Cry Club”, many travellers find their emotions heightened during air travel. Although there are few studies that can clearly explain the phenomenon, scientists suggest it’s likely related to the combined effects of travel stress, dehydration, and hypoxia – reduced oxygen circulating in our bloodstream. The hypoxia that occurs during air travel is safe and typically well tolerated by most healthy people, but in some instances, it can make us more vulnerable to physical and psychological changes. Reporter Lila Reynolds adds:

Though passengers may not be conscious of their emotional vulnerability, our brains are working overtime on airplanes due to claustrophobia, travel stress, and fatigue, according to clinical psychologist Jodi De Luca of Erie Colorado Counseling.

“We have little control over our environment while we are traveling by plane,” says De Luca, who studies the impact living in a high-altitude mountainous region has on mental health. All of these stressors trigger some people’s fight-or-flight response, she says.

To ensure you stay calm during a flight, get to the airport early and give yourself plenty of time to check-in and relax before boarding. It’s also a good idea to bring books, podcasts, music, and other tools to keep you distracted and calm. For more tips on how to keep travel stress in check, see: Travel Stress.

For many people around the world, adequate mental health care and treatment is not accessible. This long-read from the Guardian examines the universality of mental illness and highlights the lack of services and care available to those in poor economy countries. Rosenberg observes that:

In the poorest countries as well as the richest, and at every socioeconomic level in between, mental disorders were the greatest thief of productive life.

The consequences of this were catastrophic. Patients in south London had a shot at seeing any number of psychologists or psychiatrists. But the treatment typically given to sufferers of depression in wealthier countries was completely out of reach for hundreds of millions of people who needed it. Poor countries spent virtually no money on mental health.

With a number of countries – including Afghanistan, Liberia, and Rwanda – reported to have only one or two psychiatrists in the entire country, there is a desperate need for more training among healthcare providers and community health workers.  Mental health care needs to be incorporated into routine medical care and made accessible to everyone – regardless of who or where in the world they are.

Are you in need of a mental health care at your destination? The IAMAT Medical Directory includes contact details for general practitioners in over 300 cities around the world. IAMAT-affiliated doctors can refer you to a trusted local mental health practitioner.

4. You probably shouldn’t bring CBD oil to an airport

Cannabidiol, otherwise known as CBD, is a substance derived from hemp and marijuana plants. It is increasingly being sold and prescribed to address a number of health concerns, including anxiety, stress, chronic pain, arthritis, and epilepsy. However, despite the widespread use and sale of CBD in many US states and in Canada, its legality is murky. As reporter Amanda Mull details:

The lack of clear regulatory oversight is another reason that travelers might have trouble with airport authorities. There’s no governing body to set standards on CBD purity or labeling, which means that products marketed as CBD could contain more than enough THC [the psychoactive ingredient in marijuana] to attract the attention of a drug dog and pass chemical testing that would characterize them as marijuana under the law.

Wherever you travel, it’s important to check the legality of importing your medication before you go. The import of controlled substances – medications that target the central nervous system, including narcotic and psychotropics – is highly regulated around the world. For travellers managing a mental health condition with medication containing a controlled substance, your medication may be banned at your destination or you may only be able to import a certain amount.

To learn more about medication import laws and restrictions, check out: Travelling with Medication: A Guide.

For tips and guidance on managing travel stress, anxiety, depression, and other mental health conditions during travel, check out our tipsheets:

For more blogs on mental health, check out: