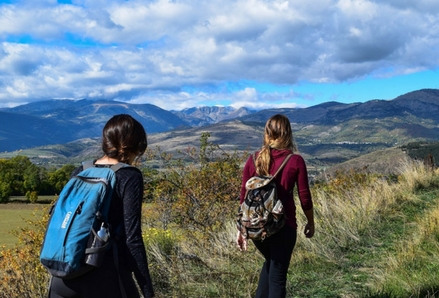 Ticks on the move

Hiking and camping are popular activities for travellers, but make sure you’re prepared to fend off ticks before you go.

Ticks are tiny arachnids that feed on blood. They’re often associated with hiking and camping in forested areas, but ticks infected with the bacteria that cause Lyme Disease have been found in city parks in Europe and North America. Thanks to climate change and urban sprawl, ticks are coming into closer contact with humans. Scientists hope that more research on ticks will help limit the spread of tick-borne illnesses (like this research on the black-legged tick’s immune system and this project on how mice contribute to the spread of Lyme in the United States).

When you travel, stay informed about tick-borne illnesses at your destination and take these steps to prevent tick bites while you enjoy the great outdoors.

How to prevent tick bites

Before you head out for the day

When you enter a building

Around the world in tick-borne diseases

Ticks live in grassy and wooded areas around the world and not all ticks carry bacteria or viruses that make humans sick. If you’re participating in outdoor activities like camping, hiking, or hunting in forested areas known to have infected ticks, you may be at risk. If you’re staying in an urban area, avoid brushing against vegetation or walking in city parks where infected ticks have been found.

Here are a few of the tick-borne diseases you may encounter while travelling.

Lyme Disease is a bacterial infection spread by bites from ticks. Ticks become infected when they feed on deer, birds, and rodents who are reservoirs for the bacteria and spread it to humans. Due to climate change, tick populations are moving into areas that used to be too cold for ticks to survive. This year, ticks were reported throughout the winter near Lake Erie in the United States.

A bump and skin rash at the site of the bite, encircled by red patch, is a well-known symptom of Lyme (known as Erythema migrans or Bull’s Eye rash). However, not everyone gets this characteristic rash. Other symptoms include fever, headache, muscle and joint pain, chills, fatigue, and swollen lymph nodes. Early treatment with antibiotics is important – Lyme Disease can become a chronic and debilitating illness if left untreated.

Lyme Disease exists in North America, Europe, and parts of Asia. Click on the countries listed on our Lyme Disease page for specific risk areas.

Tick-Borne Encephalitis (TBE) is a viral infection that causes fever, headache, fatigue, muscle pain, nausea, and loss of appetite. About one-third of people who are infected develop serious symptoms like meningitis (where the virus attacks the lining that surrounds the brain and the spinal cord) or encephalitis (swelling of the brain). Some people have long-term complications such as memory loss, speech and language problems, mood disorders, epilepsy, fatigue, and motor skill difficulties.

TBE occurs in parts of Europe, Central Asia, and East Asia. Transmission season is typically from March to November.

“Tick-borne Spotted Fevers” is a catch-all term used to describe illnesses caused by ticks infected with Rickettsia bacteria. Rickettsial infections are zoonoses (animal infections that can spread to humans) transmitted by ticks who feed on deer, birds, rodents, and dogs.

Rickettsia bacteria are present worldwide. After a bite by an infected tick, a red rash can develop and black tissue, known as an “eschar”, forms at the site of the tick bite. Some people may not have these symptoms, making spotted fevers difficult to diagnose. Infections range from mild to severe and are treated with antibiotics.

African Tick-Bite Fever occurs mainly in sub-Saharan Africa and can be a risk to travellers on safari, as one editor of Condé Nast Traveler found out.

Rocky Mountain Spotted Fever occurs in North, Central, and South America – not only in the Rocky Mountains. Cases were reported in Mexico and Panama in April 2017. It can be fatal if untreated. There is no preventive medication or vaccine against rickettsial infections.

If you’re camping, working in healthcare, or in close contact with animals during your trip, be aware of Crimean-Congo Hemorrhagic Fever (CCHF). In addition to affecting outdoorspeople, CCHF is an occupational disease among healthcare practitioners, agricultural workers, abattoir employees, and veterinarians.

The virus that causes Crimean-Congo Hemorrhagic Fever is found in Southern and Eastern Europe, Central Asia, Africa, Southeast Asia, and the Middle East. It affects wild animals and livestock. Humans become ill when they are bitten by infected ticks or when coming into contact with infected animal blood or tissues.

See our Health Risk database for a list of countries reporting recent cases.

Bitten by a tick?

These informative videos by the University of Manitoba show you how to remove a tick, step by step.