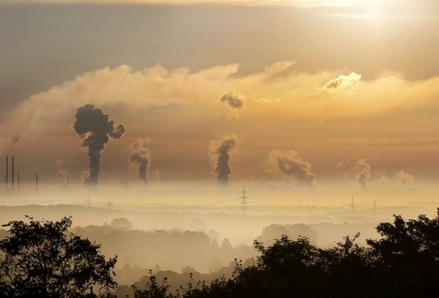 Reports of air pollution in India and China have dominated the news. Photos show thick haze obscuring landmarks like the Taj Mahal and people wearing masks to protect themselves from the air they breathe. This month, air quality was so poor in Delhi, Lucknow, and other areas of northern India that schools and construction sites were closed and residents were urged to stay indoors.

These articles highlight the serious effects of air pollution in megacities in Asia but air pollution occurs worldwide in both rural and urban areas. Over 80% of the world’s urban population is exposed to air pollution that exceeds the World Health Organization’s recommended limits.

What is air pollution?

Outdoor air pollution is a mix of chemicals, particulate matter, and biological materials that react with each other to form tiny hazardous particles.

Air pollution from traffic, factories, and power generation from coal-fired power plants is on the rise in rapidly developing African countries like Egypt and Nigeria, although data is still limited. Researcher Mathew Evans of the University of York in the United Kingdom was quoted in The Guardian:

London and Lagos have entirely different air quality problems. In cities such as London, it’s mainly due to the burning of hydrocarbons for transport. African pollution isn’t like that. There is the burning of rubbish, cooking indoors with inefficient fuel stoves, millions of steel diesel electricity generators, cars which have had the catalytic converters removed and petrochemical plants, all pushing pollutants into the air over the cities. Compounds such as sulphur dioxide, benzene and carbon monoxide, that haven’t been issues in western cities for decades, may be a significant problem in African cities. We simply don’t know.

In 2015, forest fires in Indonesia blanketed south Asia in smoke for weeks. Fires set to clear forests and old crops contribute to air pollution in rural areas, but poor air quality also results from natural events. This map from the WHO shows air pollution from both human activity and natural sources. Air pollution near deserts, for example, comes partly from dust storms.

Air pollution and your health

The WHO estimates that outdoor air pollution caused around 3 million premature deaths worldwide in 2012. It contributes to breathing problems, chronic diseases such as asthma, increased hospitalization, and deaths from strokes, heart disease, and lung cancer.

It may not be possible to avoid air pollution when you travel but you can minimize your exposure by staying up to date with local air quality advisories.

Check the air quality at your destination before your trip. Our Country Health Advice database includes tips on how to minimize your exposure to air pollution. It also lists up to 5 cities with high PM10 readings for countries reporting data to the World Health Organization. You can find information for a specific city using the BreatheLife city air pollution data search. In some cities, air quality updates are available on social media.

It’s always a good idea to visit your health practitioner before you travel. Here are some things to consider during your appointment:

Tipsheet: How to deal with air pollution – IAMAT

How the world’s poorer countries breathe worse air, in charts and maps – The Washington Post

‘There is no escape’: Nairobi’s air pollution sparks Africa health warning – The Guardian

Ambient air pollution: A global assessment of exposure and burden of disease – WHO

Air pollution goes back way further than you think – Smithsonian